In a tragic story our of Arizona, a trip to grandma’s house turned deadly for one toddler when he was mauled to death by her rottweiler. The one year old boy and his grandma were playing inside the house. When grandma opened the back door to put something outside, the dog barged in pushing her aside and heading straight to the grandson. Biting down on the toddler, he dragged the boy outside and mauled him, refusing to let the child … END_OF_DOCUMENT_TOKEN_TO_BE_REPLACED

It started off as a routing trip to the Metro Richmond Zoo in Richmond, Virginia. It ended with a bloody 2-year-old girl being treated at a hospital. Charles Sherman was enjoying a trip to the zoo with his daughter when a rooster attacked the little girl, cutting his daughter, Chloe, on the face, stomach, and arms. No word on what prompted the attack. Zoo director Jim Andelin says the rooster was relocated to a farm after the incident. So I … END_OF_DOCUMENT_TOKEN_TO_BE_REPLACED 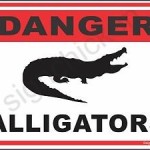 In a strange case out of Brevard County, Florida, a man who was running from police after attempting to burglarize homes in the area was apparently killed by an alligator after he ventured into a lake. Twenty-two-year old Matthew Riggins told his girlfriend that he was heading over to Barefoot Bay Lake to rob houses with a friend. But when deputies responded to a call that two suspicious men were walking behind houses in the area dressed in black, the … END_OF_DOCUMENT_TOKEN_TO_BE_REPLACED

It starts out like a bad bar joke: “A man saw another man screwing an alligator …” But in Florida, this actually happened. A passerby was concerned when he came upon a man having sex with an alligator. But even more puzzling was what he was saying. The man could be heard saying: “Next time time you try to kill a man, you best get the job done. Now you’re my bitch forever.” Apparently, this man had a good reason … END_OF_DOCUMENT_TOKEN_TO_BE_REPLACED 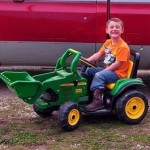 Tanner Smith, just shy of his 6th birthday, was attacked by two pit bulls in the yard of his mothers friend. He was bitten at least 16 times, many of which were in his neck. Tanner’s mother had brought him with her to visit her friend. She thought her friends father, the owner of the dogs was in the yard with her son. When she realized her mistake, it was too late. Tanner was rushed to the hospital in nearby … END_OF_DOCUMENT_TOKEN_TO_BE_REPLACED

Dog Pack Attack Joggers In Cutler, Indiana, 4 pit-bulls attacked and mauled 2 young women last week as they walked along a country road and through a field.  One of the women was critically wounded. A passing motorist drove to the women and and the dogs scattered from the car, giving them a chance to get inside. All the dogs were either killed or euthanized. Pit-bull Jumps Fence to Attack Boy In Birmingham, Alabama, a 9-year-old boy was attacked by … END_OF_DOCUMENT_TOKEN_TO_BE_REPLACED

In Genesee, Colorado, a local babysitter, Sharon Molloy, is being called a hero after she defends 3-year-old Jack Melichar for a savage dog attack. When two black dogs showed up on the family deck, Sharon and the boys, Jack and his 8-year-old brother went out to shoo the dogs home.  Like any exuberant 3-year-old, Jack was running.  One of the dogs then attacked him. Sharon began trying to pull the dog off him, and it turned on her. Two neighbors … END_OF_DOCUMENT_TOKEN_TO_BE_REPLACED

Officials in Wallisville, Texas, have decided to ban swimming at a lake after a 13-year-old boy and his father were attacked by an alligator there.  Such attacks are surprisingly uncommon in the United States.  Unlike crocodiles, North American alligators tend to stay away from humans, and serious attacks are extremely rare.

A 16-year-old boy from Ohio was injured in a bear attack at Great Smoky Mountains National Park.  It was around 10:30pm on a Saturday night and both father and son were sleeping in hammocks around 10 feet apart.  The pair were on a backpacking trip through the mountains.  The boy awoke when the bear pulled him from the hammock. The teen’s father woke up from the commotion and managed to drive the bear away.  They then hiked to the shore … END_OF_DOCUMENT_TOKEN_TO_BE_REPLACED

Girl Attacked While Playing in the Snow In Terry, Mississippi, a 5-year-old girl was attacked and killed by a pit bull as she played in the snow. Anastaisa Bingham was mauled to death outside her home just days before her sixth birthday. Nobody has come forward to claim ownership of the animal. (USA Today, 2-15-2010, 7A) Boy Mauled Outside Home In Abilene, Texas, two people faced second-degree felony charges after their pit bulls got loose and mauled a boy to … END_OF_DOCUMENT_TOKEN_TO_BE_REPLACED